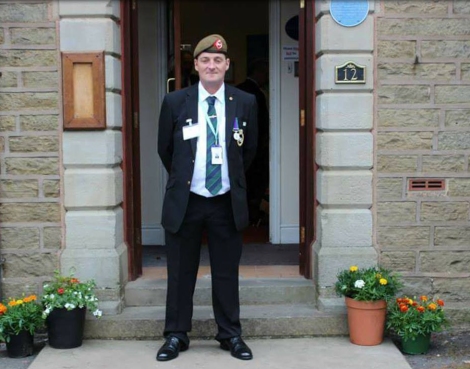 AN army veteran has made it to the finals of a national competition which honours those who have overcome major difficulties.

Tony Stubbs, 42, of Bolton, is now one of six finalists who are anticipating the announcement of this year’s Soldiering On Competition.

Soldiering On seeks to award those who have overcome difficulties including significant challenges, injury or disability and whose achievements are an inspiration to others.

Finalist Tony Stubbs said “I was surprised to find out I’d made it to the final, I didn’t think I’d make it past the first round. There were three stages, and there was thousands at the start”.

The road to the Soldiering On final was not an easy one however, as Stubbs speaks of a life in the army, a life of crime, and a life on the streets.

“When I came out of the army I found it really difficult adjusting to life.” He says, “I couldn’t get a job so I ended up homeless. I got help and moved to Bolton, I’ve got mental health problems, but the psychiatrists with the army helped me get sorted”.

“I was done for harassment, for having 13 weapons. I had an addiction to dangerous weapons, probably from my army days. I had guns, machetes, big knives. I’ve got rid of them all now though.”

In addition to overcoming his life of crime, he was also battling alcoholism for six years and is currently on the waiting list for a liver transplant.

Stubbs says the real turning point in his life came after the loss of his 16-year-old son Anthony, whose body went missing and was found dead five years ago.

“My son was started seeing me once I got myself all sorted. We had a good bond. He’d live with his mum and come to mine for a bit or for his tea.”

“I wasn’t allowed at the wake because of everything that I’d done.”

After overcoming the troubles of his life, he is now a voluntary outreach worker with a Haslingden-based veterans’ charity as well as charity Veterans in the Community.

“The charity and volunteer work keep me occupied. I like helping people, it makes me happy. If anyone is in that situation I’d say just ask for help and just get by day by day, go with the help they give you and you’ll get there.”

Overall winners will be announced at an awards ceremony at the Park Plaza Westminster Bridge Hotel, London, on April 20.