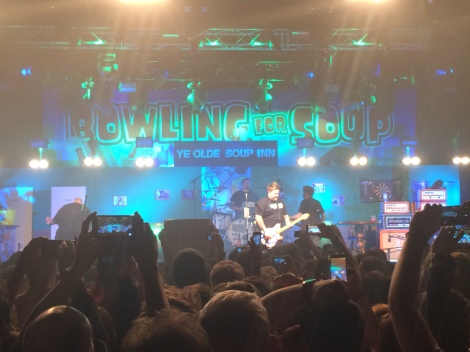 AFTER last performing in Manchester on their ‘Farewell’ tour, American punk rockers Bowling for Soup returned to play the Manchester Academy…

Bowling for Soup represent to many a certain sense of nostalgia. Back when everyone had hair covering their faces, wore converse, and owned a million hoodies, each in a different colour, leaving wardrobes looking like a packet of skittles. The sense of nostalgia was something that continued throughout the night as the crowd sang along to every song, despite the band’s most known tracks being released around 10 years ago.

Hitting the limelight back in 2002, the Texan four piece have stood the test of time. As 2016 bears a hefty reminder that the days of ‘Girl All The Bad Guys Want’ is half the age of the average crowd member, Bowling For Soup proved they still pack the punch just as much as they did back in the day.

Reliving my 16 year old self! – attending Bowling For Soup – How About Another Round Tour 2016 at Manchester Academy https://t.co/2UOwuYaOVe

Entering the Manchester Academy and heading into the first track of the night, frontman Jarret Reddick describes ‘The Bitch Song’ as ”the one that started it all” as the night goes full throttle into the teenage angst driven days in getting the crowd up and on their feet. The stage followed the theme of ‘how about another round tour’ and is appropriately decorated as an old inn with a sign bearing ‘Ye Olde Soup Inn’. Taking the set one step further, at the side the set is complete with toilets and a fully functioning bar.

With no new album to promote, the set list for the night was heavily comprised of the plethora of hits from over the years. Taking notice of the band’s longevity, Reddick asks the crowd “who thinks punk rock is dead?” before entering a medley of punk-rock songs including ‘All The Small Things‘ (Blink-182), ‘Basket Case‘ (Green Day), ‘The Middle‘ (Jimmy Eat World) and ‘Girls & Boys‘ (Good Charlotte). Each track smoothly enters the next as each of these fine examples of punk rock edginess continue to remind the Manchester crowd that they still remain relevant today.

And most importantly, the crowd still remember them word for word.

Acknowledging that he has piled on a few pounds, even asking if anyone has “noticed I’ve got fat?” Reddick and the rest of the band are still enjoying themselves more than ever, with stage presence mirroring the music video for ‘High School Never Ends’. With guitar picks bouncing off the guitars to then be stuck to their foreheads, Bowling for Soup are still tearing up the stage and partying in the only way they know how.

My self deprecating fat jokes are really doing well.

Following the big tracks that fans instantly recognise such as ‘Punk Rock 101‘, ‘Almost‘, and ‘1985‘ that scream in your face punk-rock tracks that defy the genre, the Texan four piece also found the time to switch to a more power ballad style. Bringing warm-up act Dolly Rots vocalist Kelly Ogden, to duet with ‘Love Ya, Love Ya, Love Ya’ alongside fellow Dolly, Luis Cabezas, joining Soup on the guitars. A hard-hitting track truly showcasing the vocal talent of the pair and not just shouting over distorted guitars.

Overall, Bowling For Soup offer nothing new, but it’s what they’ve been giving punk rock for so many years that continues to push them to the forefront of the genre. Tracks throughout beard the strong sense of nostalgia and youth reminiscence, to which the Manchester crowd even found themselves singing along to the ‘Phineas and Ferb’ theme tune. A fond memory that still bears relevance today is one that Bowling For Soup pull off spectacularly.