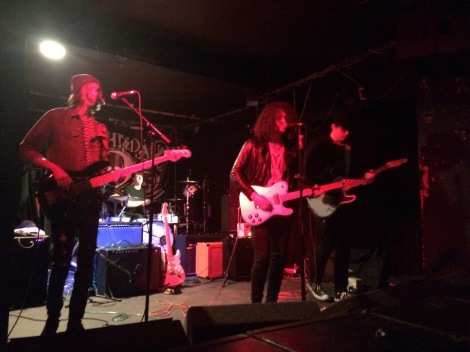 BASED in the northern sea town of Grimsby, fresh indie rockers Mint took to Manchester’s Night and Day Cafe…

Just over a year ago, Zak Rashid played a solo set in a small bar in the small seaside town of Cleethorpes. With a lot less hair going on and no leather jacket with hanging tassels, it’s difficult to imagine the success his band Mint has had.

Fast forward a year and the enigmatic front man is thrashing guitars with fellow band mates to a packed out Night and Day cafe.

The Grimsby four-piece described themselves as “fresh, new and sexy” back when they performed at Manchester’s Bierkellar. Since then, with the addition of Sam Chapman taking over on drums, Mint have come on leaps and bounds an even made the BBC’s Introducing list, earning themselves some hard earned radio time.

Not bad from the town which was recently voted the worst place to live in England.

After teasing the Manchester crowd twice with a sound check that turned heads, Mint immediately catapulted themselves into the centre of attention once they eventually began their set. A sound which can only be described as pure indie magic, Mint infected every set of ears in the place, generating the need for every head to bob in admiration as opening track ‘Spoilt’ echoed through the cafe walls.

Demonstrating a wide range of talents as both musicians and performers, the soft emotional touch of ‘Jimmy‘ brilliantly highlights the perfect delivery of vocals in the form of frontman Zak Rashid, expertly complemented by the band’s capability of showing they’re not just thrashing on guitars, they are fully aware of how to slow things down and then contrast with the hard-hitting uppercut of ‘Mirror‘.

With the addition of ‘Wonderland‘ and the upcoming ‘Living & Dying For‘, which is due for release soon, the repertoire the indie rockers are armed with demonstrates a fierce stamp on the music scene and what is to come from the Grimsby band.

Showcasing hit track ‘Wolves‘, which received an impressive 2000 views after just a few weeks of being released, the opening guitar lick from guitarist Adam Shaw, erupts like a volcano to inject the crowd with a perfect demonstration of the musical talents Mint has to offer.

The catchy and expertly delivered vocals of chorus line ‘I was raised by wolves’ brought the night to an end with the Grimsby four-piece lashing out guitars in an explosive end to the show.

Despite being recently formed, Mint have been fortunate to open up for fellow indie stars The Pigeon Detectives in Mint’s hometown. If you’ve ever wanted the definitive sound of the detectives but with more depth, a delicate touch and a fresh minty burst, you’ve got yourself a band that’s destined for greatness.

New to the scene as they may be, the impact of Mint is due to erupt in the near future. A ravishing display of musical genius, coming together to give fans pure indie thrashing brilliance.