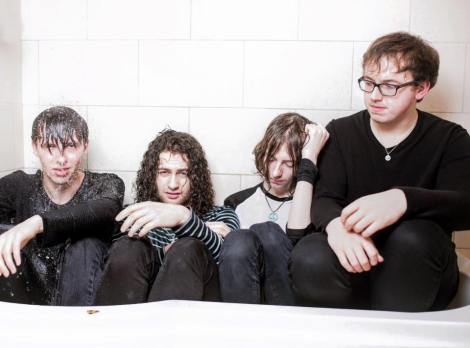 After making the BBC introducing List, playing alongside Pigeon Detectives and Foals, signing to a record label and announcing an upcoming EP, Indie four piece Mint frontman Zak Rashid speaks on how the Grimsby lads made it this far…

Everybody wants to be a rock star, right? Maybe get some friends together, get a band going. Maybe it fails and you go onto other things, or perhaps you get signed by a record label, enter the BBC introducing list, and play with some of the biggest artists going right now? Meet the North Lincolnshire town of Grimsby’s latest offering – Mint.

“It’s cool to be small band, that’s why we’re doing better than we should, indie bands are back in.”

Mints live performances are energetic jam-packed anthems of indie thrashing guitars as their self claimed ‘music to make you kiss strangers’ entices audiences into a frenzy of mosh-pit madness.  Sitting in his home studio with his notorious mint coloured Stratocaster perched on his lap, frontman Zak Rashid speaks of an upcoming EP due for an October release.

Speaking on the origin of the band, Rashid reveals a failed solo career that didn’t work out so well, before the existence of Mint. Playing an empty bar in Grimsby’s neighbouring town of Cleethorpes, the binary opposite of the long curly haired leather clad Zak Rashid takes to the stage – or what is more of a corner of the room –  as he joins the ignored ambience of background noise.  “Basically, I started to record some solo stuff, but I was clueless.” He says” Then I was in the studio and I realised the music just began to sound like band music “. Following his realisation, Zak then reveals what would eventually become the finished outcome we know today was in fact originally a backing band.

Laughing at the thought of what he probably regards the greatest decision he never made, he goes on to describe a drunken night with the band which lead to the decision that a band should even exist. “We were just talking crap and I realised the backing band idea was lame.” So after discussing band names – The Tulips amongst considerations – Zak, Andy Adam, and Sam decided on Zak’s favourite colour, Mint. “I didn’t really like it” says Zak “I said it as a joke, but it’s a northern thing though, innit?”

Mint’s northern sea town of Grimsby has fallen on hard times recently. Once renown worldwide for its thriving fishing industry, it’s known more these days for taking the spotlight on Channel 4’s Skint and Sara Bacha Cohen’s Hollywood comedy GRIMSBY– both not in flattering terms of Mint’s hometown.

With the town barring its negative connotations that people throughout the country will undoubtedly make their own assumptions of, it can be hard to imagine a music scene being pivotal within the local area at all. Speaking of achieving a moderate level of fame in the Lincolnshire area, Zak says breaking away from the Grimsby mind set was the first step on climbing the ladder of success.

“We did the toilet circuit and then immediately had a name for ourselves, it’s not hard to do that in Grimsby.” He confesses” There’s a lot of people who are settling within the comfort of being a local celebrity rather than the best in the game. Once we got out of that narrow minded view on things we realised we can do whatever we want. “

Former Oasis front man and Indie Legend Noel Gallagher caused outrage last year as ‘the Chief ‘said in an interview “there aren’t enough working class bands anymore, and the ones we have are sh*te” Following up on the view of the working class, the Mint frontman says the bands unique sound is all because of Grimsby. “People say working class towns make the best music and you don’t get more working class than Grimsby. “he says with a cheeky grin on his face “Were trying to be unique. When we play back home, 30% are young and the rest are old. So I think that gives us an authentic vintage kind of feel”.

Despite being from the parallel side of the country, the news of fellow indie band Viola Beach’s untimely death shook the very foundations of the music world. “We where in the studio when the whole thing happened” says Zak as he looks down, the mass of the twizzled perm covering his face as he fumbles around the tuning pegs of his guitar “we where absolutely gutted, and so were the producers because they were in the same studio as us. They have a little family over there so it was quite eerie whilst recording.”

Growing up, Zak describes a fondness of bands that first enticed his mind and set him on the road to indie stardom. He describes playing alongside the Pigeon Detectives and Foals as a dream come true. However, a moral tale of never meet your heroes derives from the conversation as Rashid describes an altercation with Foals front man Phillis Yakannis.

“I’ll say this till the day I die,” he says with a pointed finger “people effect your life more from a distance. I remember listening to ‘Spanish Sahara’ and it moved me. I always said if I ever get the chance to meet him, I’m gonna tell him. Because everyone who’s made somebody feel like that deserves to know!” However, dreams of a hearty handshake or perhaps something more from the inspirational Foals frontman kicked Zak to the curb as he describes meeting him after a show to confess his love for the track. “He just didn’t care” he says now shaking the luscious curly locks with a rather disgruntled expression “I was like, what a nobhead! Genuine people have better s*** to say. Look at Kanye, I could outdo him on speeches but he’s in a bubble, it’s the smaller people who make the bigger footprint”

Fans can enjoy upcoming track ‘Living and Dying For’ from today via iTunes or other music outlets. Revealing some BIG plans for the upcoming year, a rather excited Mint man reveals some secrets as to what to expect from the indie four piece. “I can’t really say anything about it yet” he says with a trembling lip, as though all of the secrets of world could spill out as he overflows with excitement “It will be the last track until the festival season is over and the EP comes out. “The EP, which is currently unnamed, will include four brand new tracks with two being given music videos in 2017. “So come new year, we’ll have one new music video and the next around February time.”

Mint’s major breakthrough was receiving the call from BBC Introducing South Humberside after being invited to introduce ‘Wolves’ to the public. Confessing an initial eureka this is it moment, Zak says he was then knocked down a few pegs as the presenter mispronounced him name. ‘One of them called me Jack. He went: ‘Mint are, Jack, Adam, Andy, and Sam!’ I was like for f*** sake! You had one job! It was the first time we was on the radio and it just killed all my vibes, the lads called me jack for a week”